I am excited to introduce you to Craig who is a pretty amazing high school senior in the class of 2019 from Louisville High School.  You may hear family and friends call him CJ, but everyone calls him a friend.  He is just one of those guys who can get along with everyone, and for good reason.  Friends would describe Craig as smart and athletic, but it would be the caring and thoughtful qualities that win you over.  These were also the reasons I was so excited for his senior portrait session.  Well... that, and the fact that we were taking his portraits at Berlin Lake on his boat!  I was downright giddy at the thought.

A Traditional Start to the Session

When I arrived at their cabin, Craig's mom was in the driveway to greet me and we discussed how happy we were that we had postponed his session by one day.  As in typical Ohio spring fashion, the previous day was a mix of sunshine and storms with some rather gusty winds.  Waiting one day gave us some nicely filtered sunshine and a significantly calmer atmosphere.  Craig greeted me with a smile that I was excited to capture in portraits and showed me his fabulous wardrobe choices.  We discussed our plan for the evening and set it into motion.

We decided to start with his most formal look and I was quite captivated with both his smiling and serious poses.  This was a good way for Craig to get used to my excited expletives from behind the camera.  He just looked great no matter where I placed him.  Ahhh... and just look at this warm light! 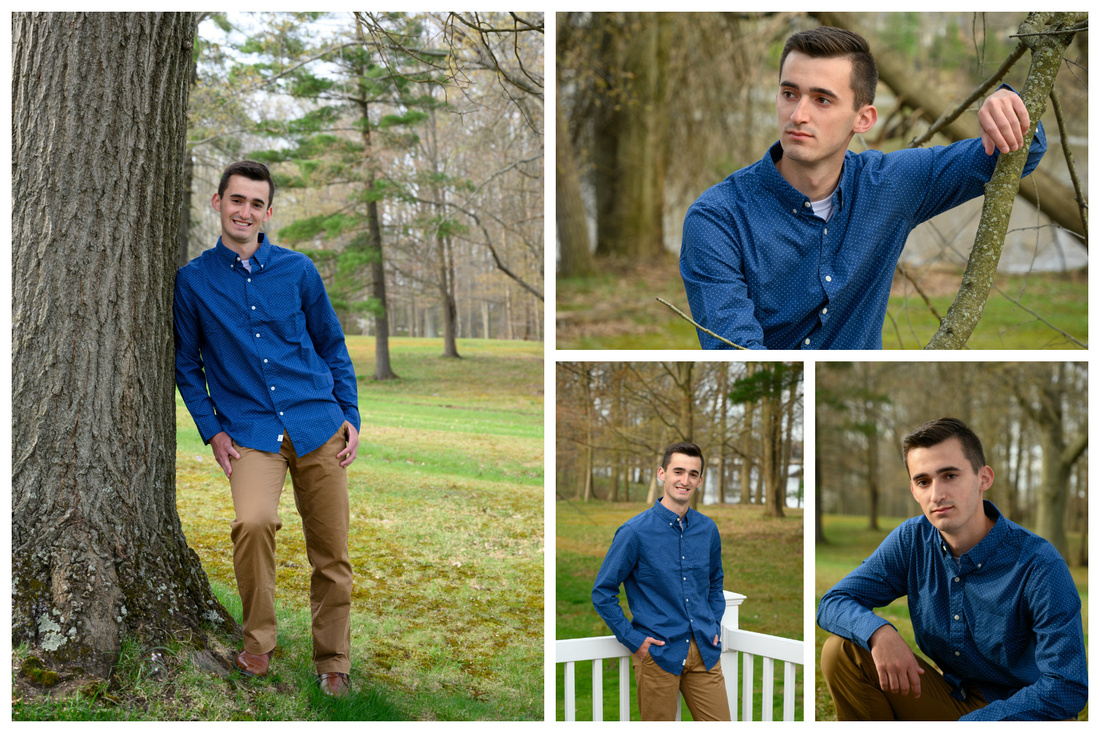 Going for the Stylish Renegade Look

So, I'm all about the nice polished look that we achieved above, but I was really excited for the next outfit.  I may have labeled this section the "stylish renegade look," but the words that were really in my head were the "badass look."  I knew that this bridge would be the perfect spot to pull it off!  I'm pretty sure that Craig heard the words "holy crap" come from behind my camera several times.  It was hard to contain my excitement.  He gave me everything I was asking for and more to achieve these amazing shots.  I will say that the semi trucks flying by made my heart stop a few times, but it was so worth it! 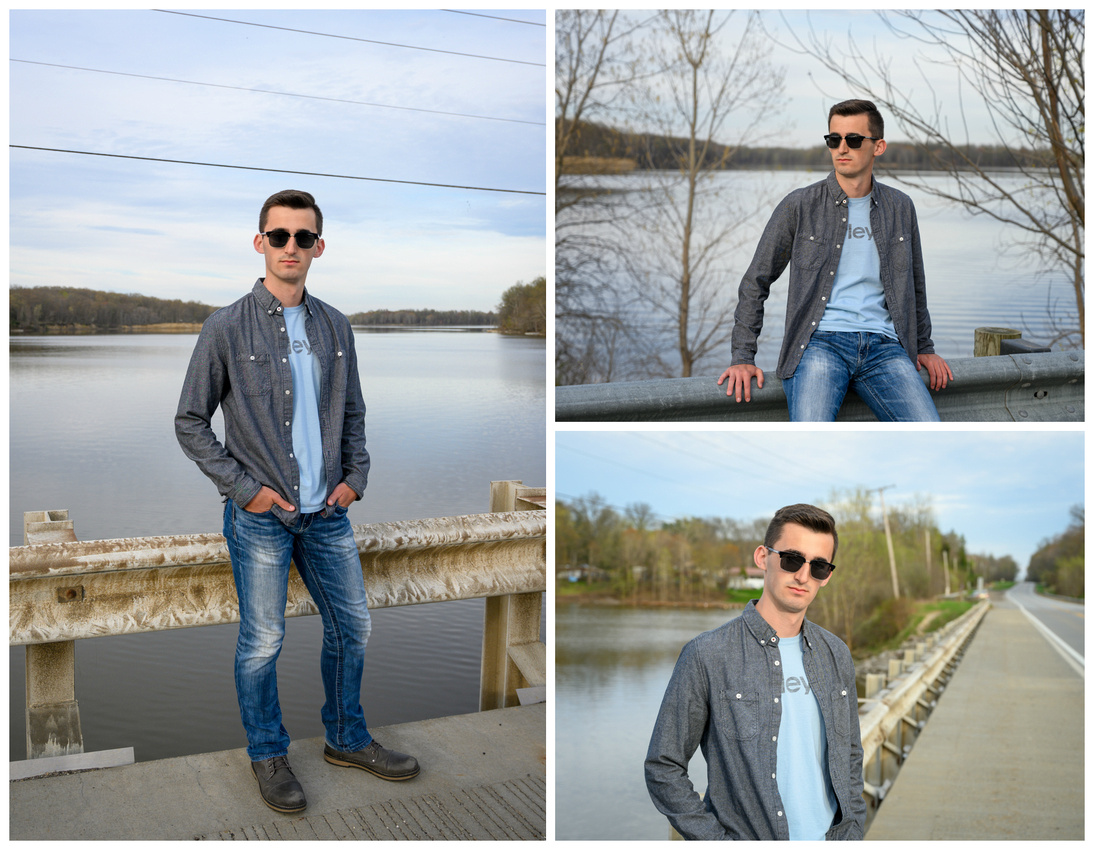 I wasn't quite done with this fabulous look, so we captured a few shots away from the bridge and without the sunglasses so that you can see those intense eyes.  Of course we had to include the letterman's jacket.  Track has been a big part of Craig's high school career, so we wanted to document that. 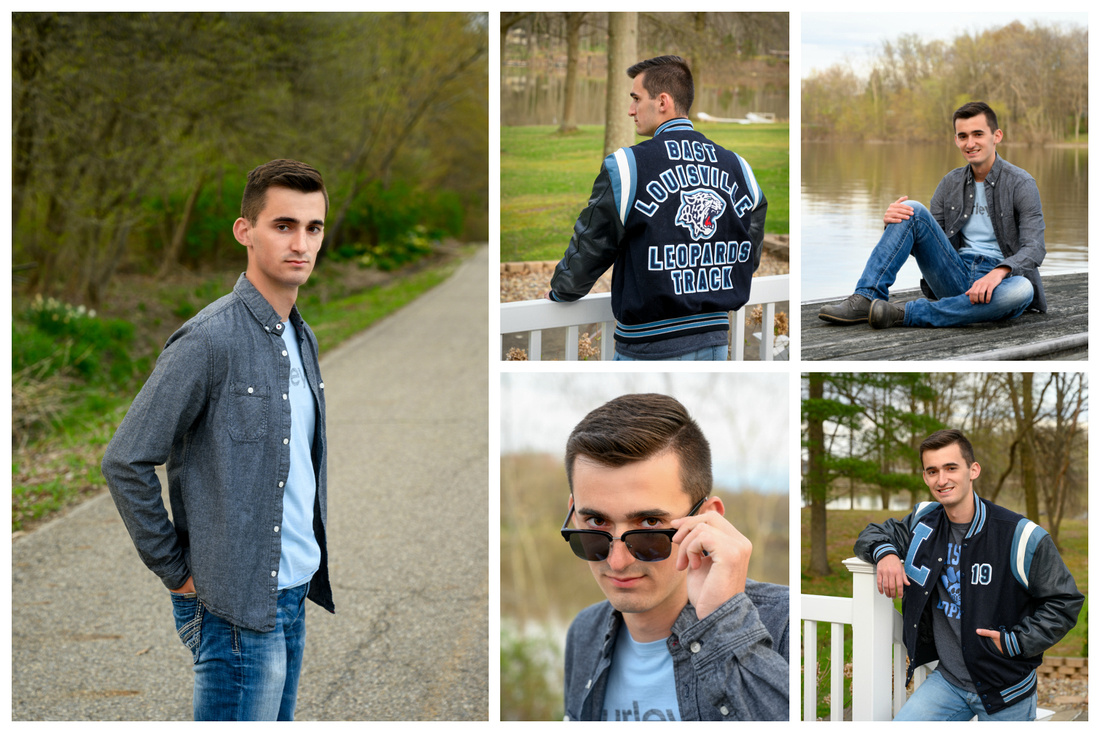 Bring on the Boat and Board

And now, for the portion of the session that I was most anticipating!  When Craig changed into his board shorts and vest, it was clear to me that this was his comfort zone.  Hopping into the boat and revving the engine to a start sparked something in him that I was excited to capture in portraits.  I wanted to show both the intensity of the sport and the sheer joy that it brings him.  This is his passion.  You can see that below.  I think it may have been our discussion of him landing his 360 (that would be a complete spin in the air) that generated the authentic smiles you see below.

I could have continued taking his portraits all evening in this setting.  Wakeboarding is a bit of a culture and I wanted to show as many sides of that as I could.  Craig's dedication and work ethic fit into that culture.  Becoming one with your board takes a lot of time on the water.  Choosing the right board is crucial, and Craig seems to have a great partnership with his Hyperlite. 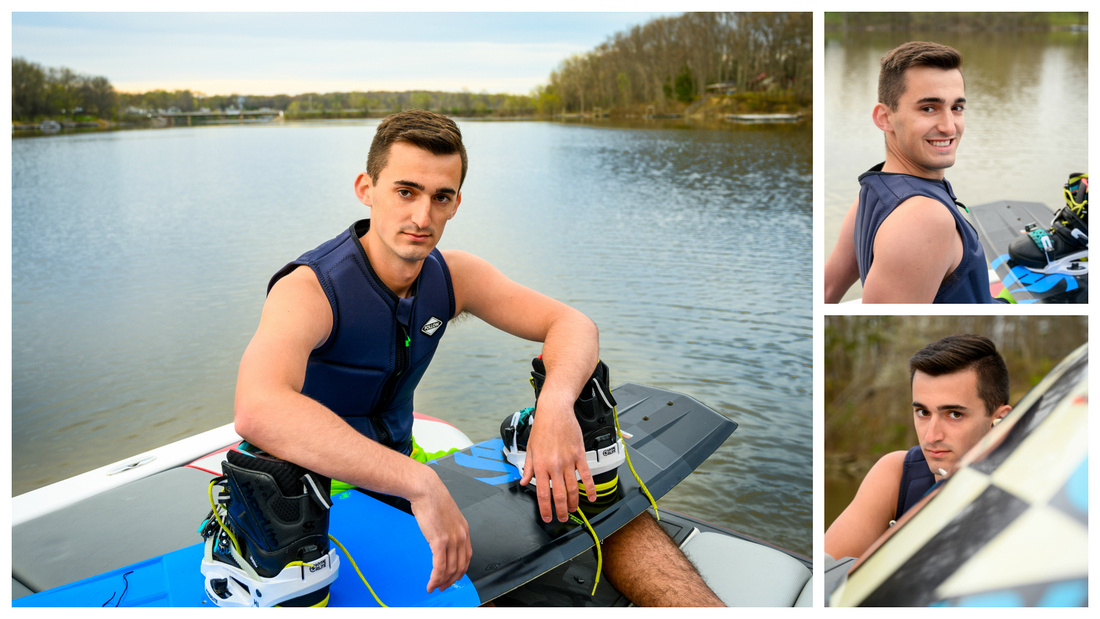 Looking at the Bigger Picture

Let's talk about this sweet boat!  This will be his second season riding behind this beauty.  It is a Moomba and it is decked out.  That tower is a must to maximize hang time, and where else would you mount those speakers?

So, we had a hard time getting any serious pictures because we were laughing so hard. You see, Craig's dad is actually crouched down between the steering wheel and drivers seat.  He was getting really good a driving the boat from the floor.  We would occasionally see a little head pop up to reposition the boat and we would lose it.  I give him a ton of credit, because he placed that boat exactly where I needed it to get the shots.  This would not have happened without his expert driving.

Nonetheless, seeing Craig in this environment taught me so much about him and I admire him even more.  I was also thankful that the sun decided to bless us with that lovely glow in the background.  I jokingly told Craig that I was hoping for some action shots.  Considering that the water temperature was maybe 50 degrees, I knew that would not be an option. 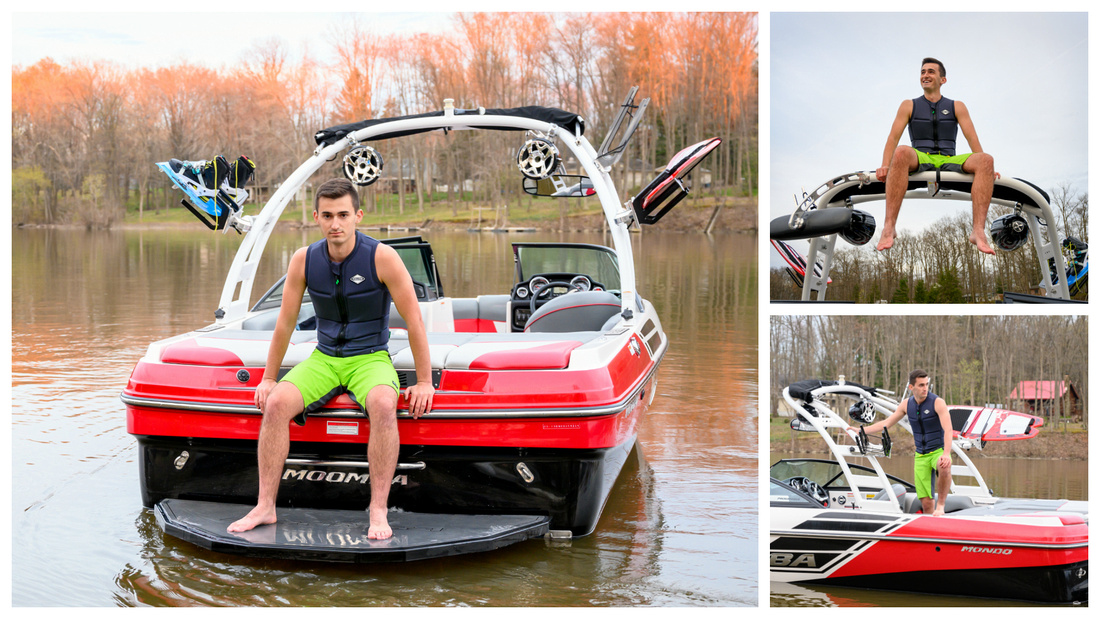 Craig is an active guy.  When he isn't on the lake, he is busy with track, the YMCA Men's Basketball League, National Honor Society, STEM Club and Spanish Club.  In addition to wake boarding, he enjoys fishing, golf, basketball and video games.  He pretty much likes to do anything outdoors.  His music preferences include Queen, Billy Joel, Journey and much of the 80's and 90's Rock.  Avengers Endgame is a favorite movie.  He loves Oreos and likes to eat at Olive Garden.

In addition to being talented and good-hearted, Craig is a successful student thanks to innate intelligence and a strong work ethic.  He is playing to his strengths with his plan to attend the University of Akron to pursue a degree in engineering.

Craig, I think you already know that I had soooo much fun with you and your family during your session.  You were amazing, as your portraits show.  I will enjoy watching your future unfold to see all of the good that lies ahead.  Best wishes to you and thank you so much for trusting me with your senior portraits!

You make the memories; I will help you cherish them.

What did Craig have to say about his senior portrait session with Laura Esposito Photography?

We chose Laura Esposito Photography because of her reputation and the posted pictures of my friends were great.  I liked that she was so flexible with fitting the session to what I wanted to do.  My favorite portraits are the ones with the wakeboard and boat.  I was surprised at how fast the session went.  She did a great job.