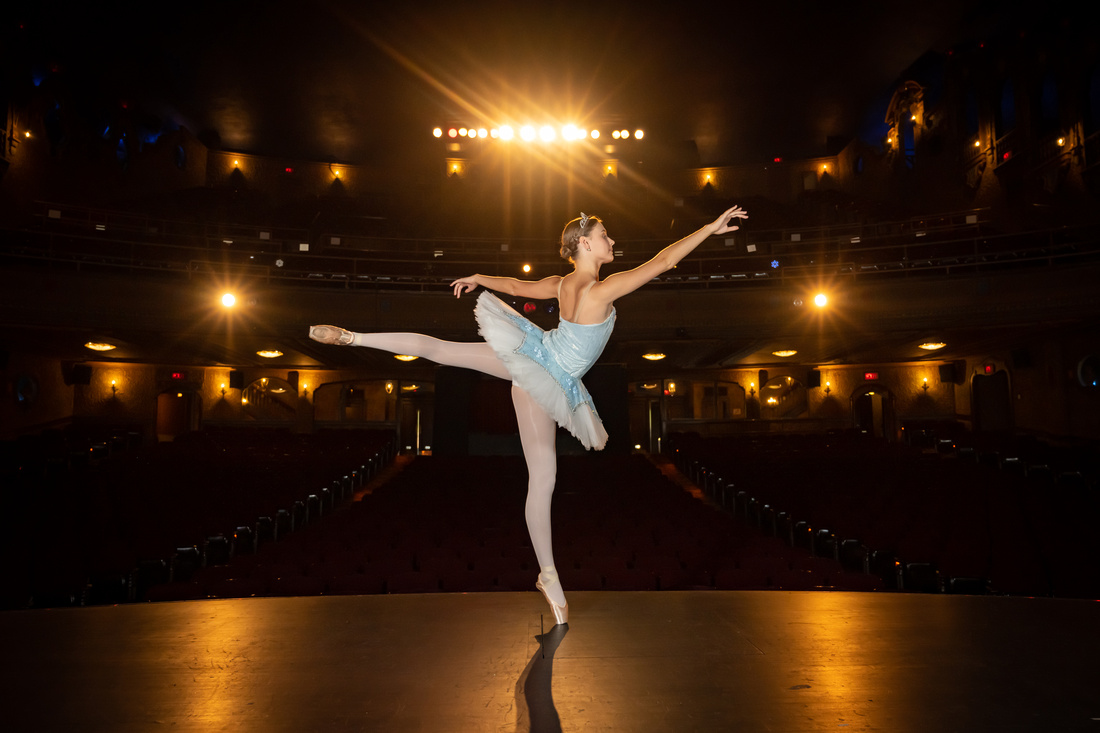 Jane is a Senior in the Class of 2022 at Alliance High School and we held her August senior portrait session at the Canton Palace Theater, Glamorgan Castle, and the campus of the University of Mount Union. As you can see, Jane is an accomplished dancer. Anyone who dances at this level has dedicated countless hours and many years to developing this demanding art form. Jane is no exception. She has danced in the Canton Ballet Company every day after school and on the weekends and it shows. As we were in the planning stages of her session, this image above was one that I knew I had to capture. So, when we found each other and carried all of our gear into the Canton Palace Theater, we made this our first priority and captured it as our very first portrait.  I wanted something that would evoke some powerful memories for Jane. Using the vantage point that she can see from the stage helps to achieve that. The dramatic backlighting of the historic Palace Theater makes it extra special. 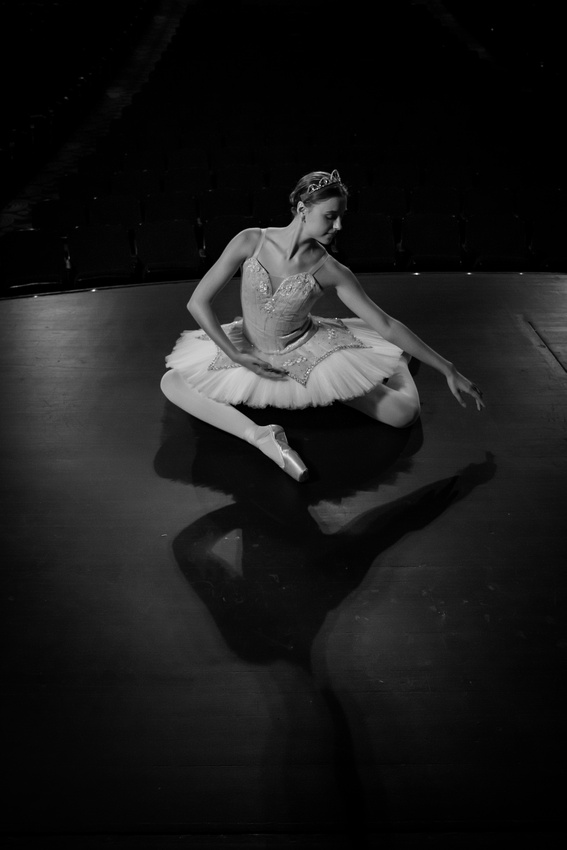 Ballet is the epitome of elegance and I think that this image in black and white illustrates that. I chose the angle of lighting carefully to show her purposeful lines and the definition in her neck and shoulders. I also wanted the backlight to help create the shadow of her outline on the floor. It may look simple, but there was a lot going on to make this happen. I appreciated Jane's mom for being my "VAL" (voice-activated-light) so that I could perfect this two-light set-up. But, let's give credit where credit is due... Jane provided the inspiration. 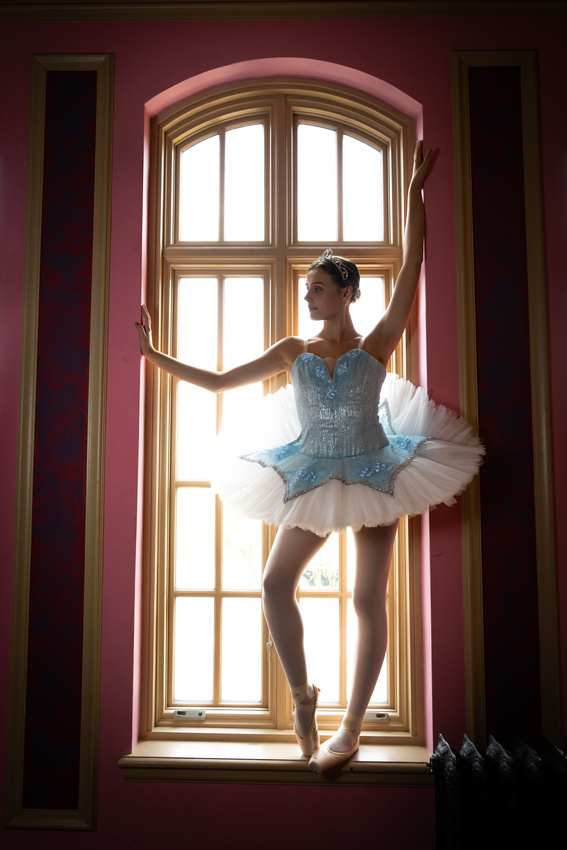 As we moved up stairs to another beautiful space, I wanted to play a little more with light. I thought the translucence of the tutu was a fun element to incorporate. Backlighting also brings emphasis to the outline and form which Jane has mastered. 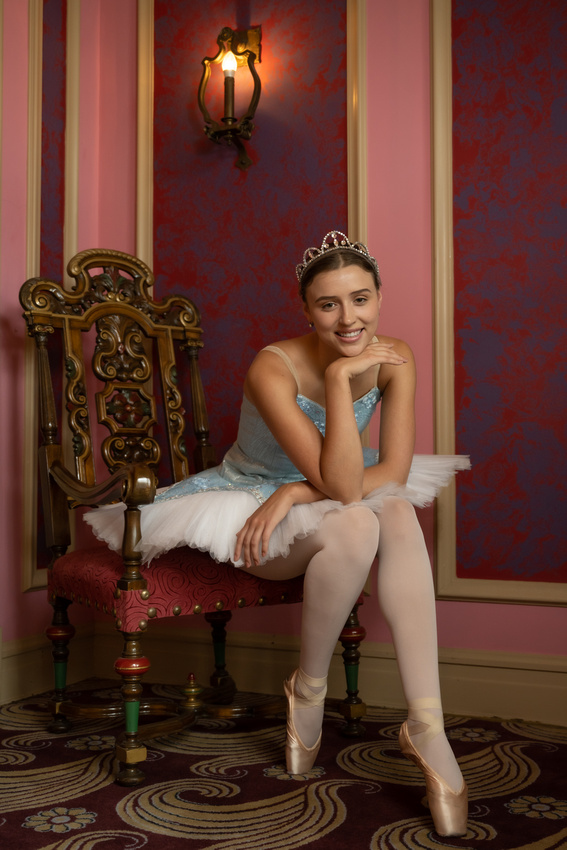 Behind all of these impeccable dance poses, is an amazing young lady who is described by friends as a leader, outgoing, funny and kind. In addition to her dedication to dance, Jane sings in an auditioned choir, the Choralaires. She is a National Honor Society member, the President of Alliance High School's Student Senate, and a class officer. 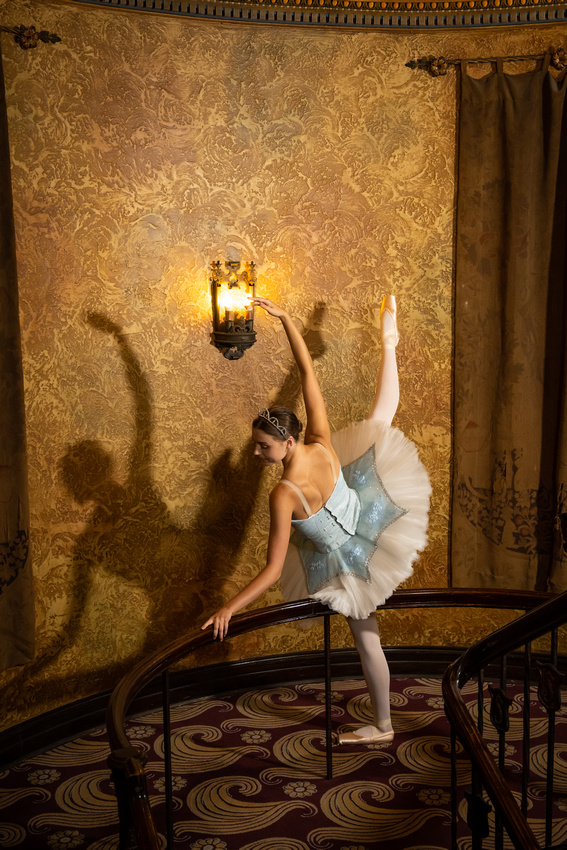 I was having so much fun playing with form and shadow, that I had another idea for a statement portrait. It involved using the ornate stairway at the Palace with a railing that conveniently served as a ballet bar. The cool tones of her tutu stand out perfectly against the warm tones of the wall and drapes. Again, kudos to Jane's mom for serving as my second light stand. 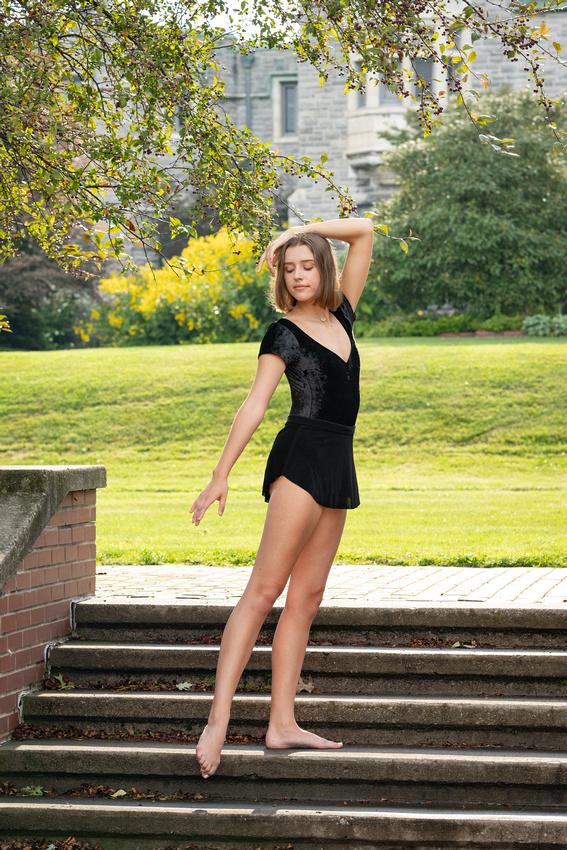 Our time at the Palace Theater had come to an end and we made our way to Glamorgan Castle for another set of dance portraits that were a little more casual and carefree in nature. Her black leotard against the grays and blues in the stone was a powerful combination. Capturing her elegant lines complemented by the organic forms in nature is so pleasing. 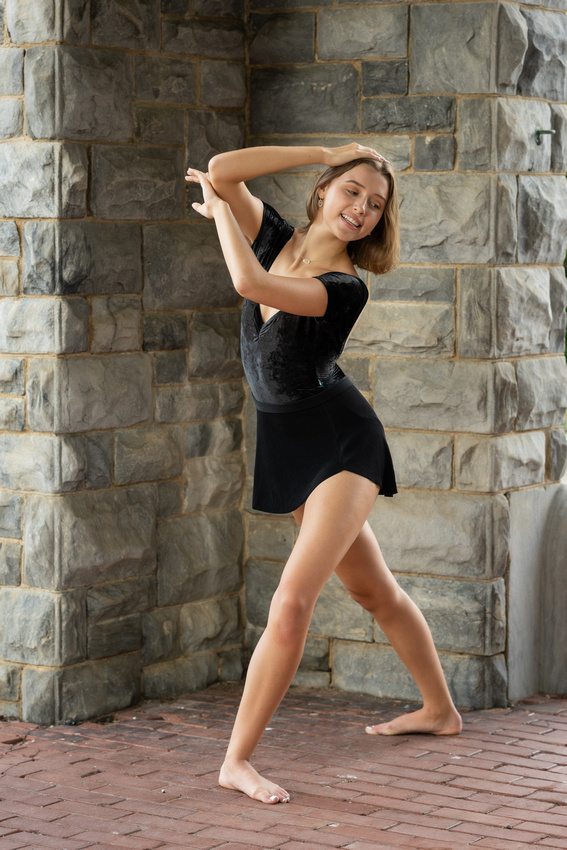 Jane has many interests outside of dance. Her favorite music is anything by Taylor Swift, especially the song Cowboy Like Me. She also loves Broadway musical soundtracks. The movies Clue and A Quiet Place are high on her list, but they can't top The Sound of Music. She likes many books by Agatha Christie. More recently, she read and loved The Seven Husbands of Evelyn Hugo by Taylor Jenkins Reid. Another favorite is Julie Andrews' Memoirs; Home and Homework. Some vacations that she has particularly loved have been to Disney World and Austria. 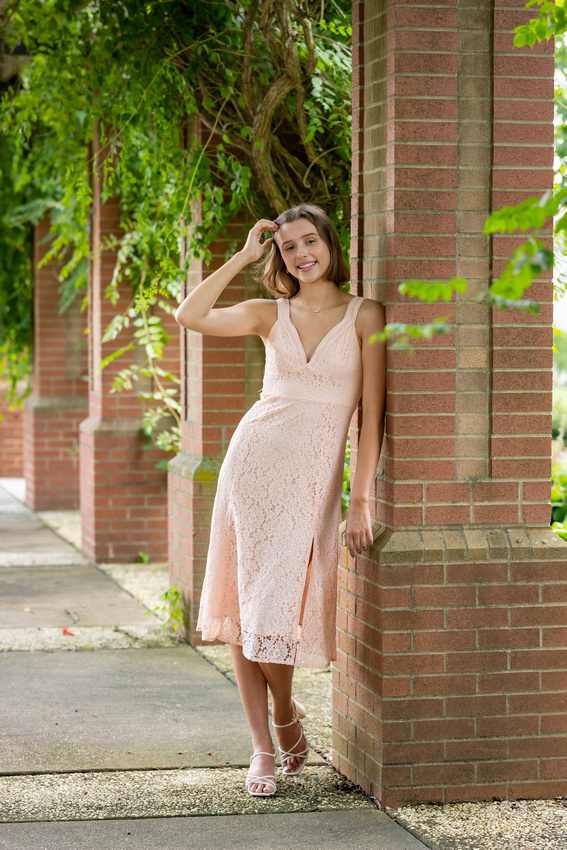 Because Jane is about so much more than dance, we moved on down the street to our final location, the campus of Mount Union, to capture some portraits of Jane being Jane. That lace dress was made for her! 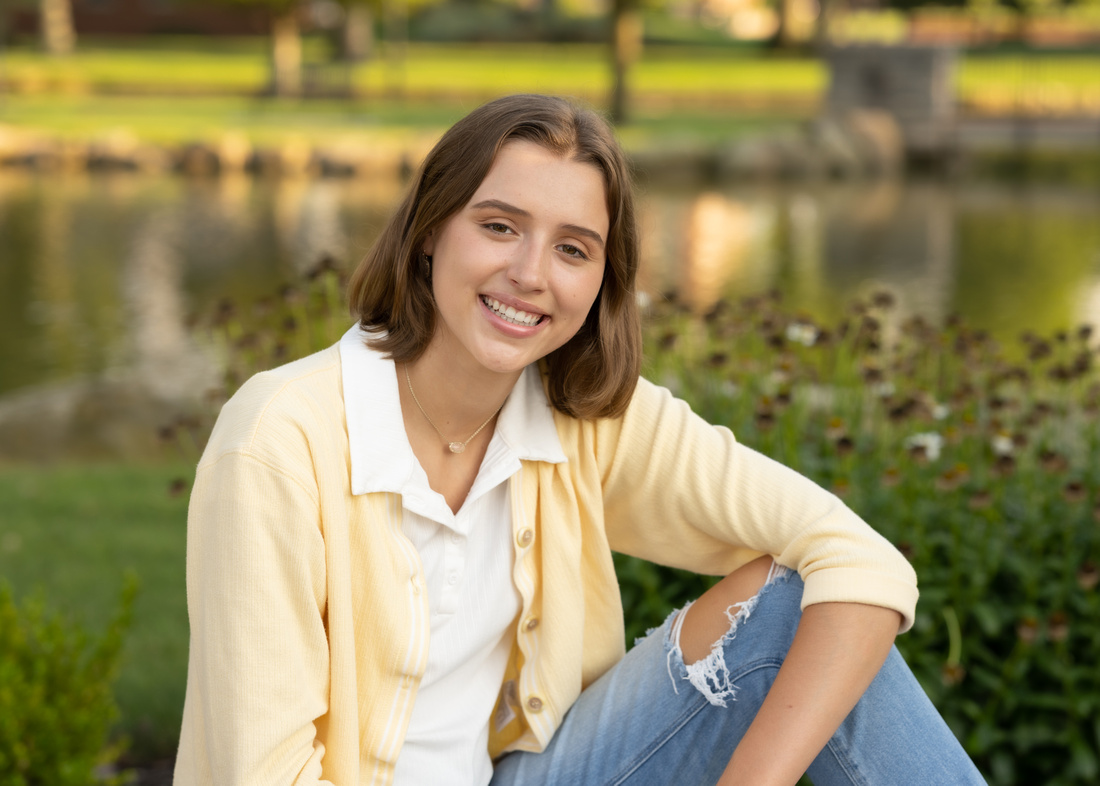 Jane's second outfit was such a great look for her casual side. Jane loves to write in her free time. She also loves watching movies and TV shows to learn about how they were made. Fittingly, Jane wants to major in creative writing in college and minor in dance. 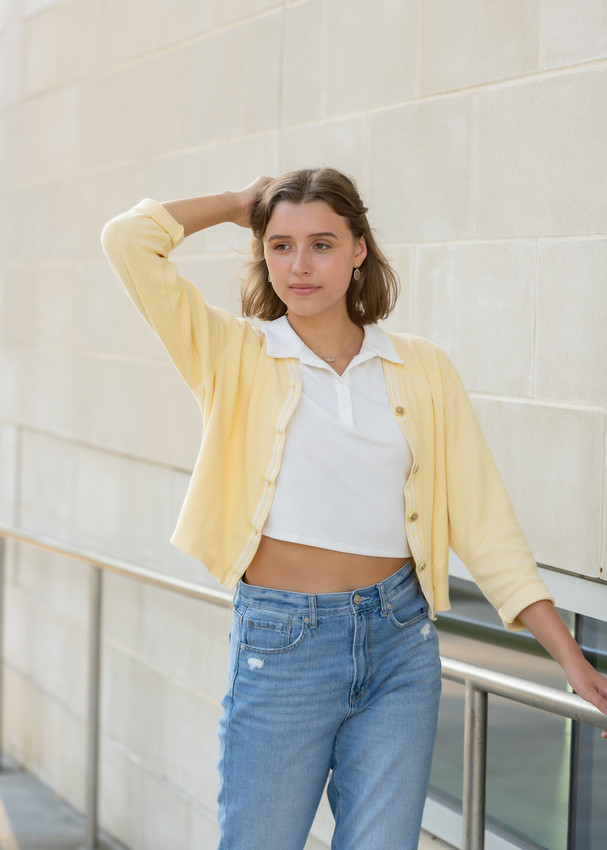 Jane knows that she is going to miss her friend groups from both school and dance. She will also miss some of the the teachers that she had for three or four years. She has gotten to know them really well over that period of time. The thing that she will not miss at all is the super early mornings. 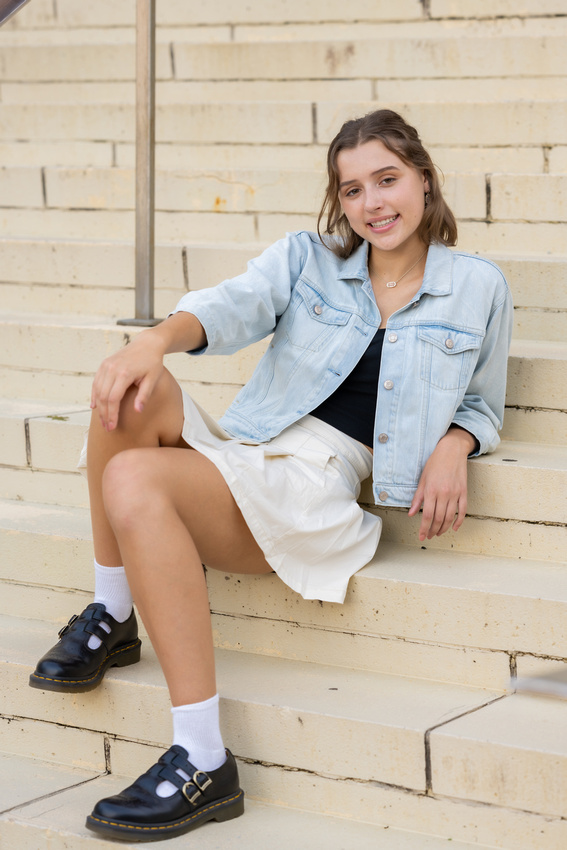 We moved on to Jane's final outfit which was such a fun look to capture.

What did Jane have to say about her senior portrait session?

"I loved getting to take pictures at a few different places that really represent who I am at this time. I loved Laura's energy, creativity, and eagerness to find great spots and poses. I loved my pictures in my tutu at the Canton Palace Theatre because that is a special place to me. I loved all of the shots we got there. Particularly, the ones we took from the stage looking out with the lights in the background, and also the ones in the chair upstairs where I'm touching my ribbons or leaning with my chin on my hand. My session was very special and unique to me." 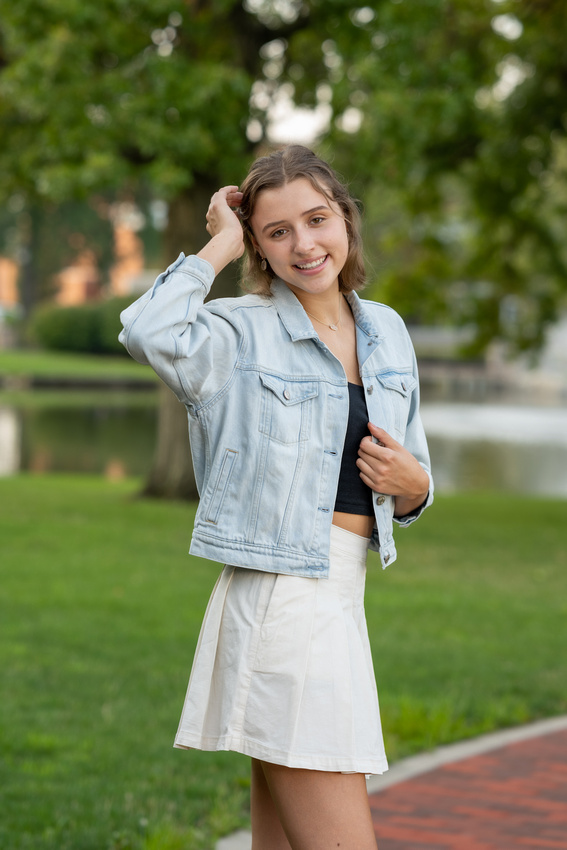 Jane, you are such a talented, ambitious, and sweet young lady. I am humbled by you and the opportunity to capture your senior portraits. I am quite certain that your future will expound on this foundation and I can't wait to watch you soar. Best wishes and enjoy the ride!